From Untouched to Under Saddle in Two Hours: Ray Ainsworth Works His Magic in Iowa

Dubuque, IA – November 4, 2014 – When Becky Shady’s grandfather, Harry Shady, pulled up at Blain’s Farm and Fleet in Dubuque, Iowa, he had on his stock trailer three horses that had never been touched.

The Shadys had traveled to see Ray Ainsworth and to get a hand from the renowned horseman in starting their nervous and completely unhandled young horses.

As the first of the horses, a mare dubbed “Mustang Sally,” loaded willingly back on the trailer just a few hours after Ainsworth began working with her, she had not only been touched, Ainsworth had haltered, saddled, dewormed her and sat on her back for the very first time.

Watch a short ‘before and after’ clip of Mustang Sally here:

“[Ray] is unbelievable,” Becky said. “He far exceeded my expectations of what I thought we would accomplish today.”

After working with Mustang Sally, Ainsworth repeated much the same groundwork with Ruby, another previously unhandled mare. 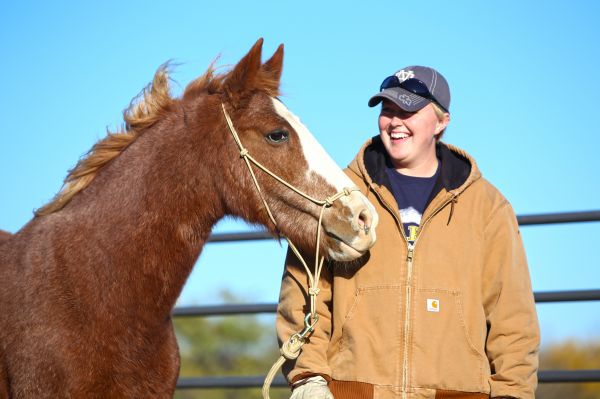 Becky Shady and Ruby, a horse that prior to working with Ray had never been handled.

Becky continued, “Now, after less than an hour with Ray, to have it to the point where I can touch it is amazing. It’s absolutely incredible. I’m so impressed, and I definitely recommend Ray to other people.”

Ray introduces “Mustang Sally” to a saddle for the very first time.

For more information on booking your own clinic or training session with Ainsworth, please contact:

Emily Riden
Phelps Media Group International
561-753-3389
This email address is being protected from spambots. You need JavaScript enabled to view it.

Meet "The Man Horses Talk To"

Ray does not train horses; he teaches them in a way that makes him one of the world’s most unique horsemen.
Ainsworth was born and raised in Raymond, Mississippi. From a young age, he studied the language of horses. As a winning jockey, trainer, and competitor, Ainsworth developed and fine-tuned a resistance-free, no-nonsense technique that he uses in teaching horses and working with behavioral issues of every kind.